A Supranational Response to Corruption: The Case for CSO Engagement

Around the world, nearly one in four people still pay bribes to access essential services, demonstrating that despite the surge of anti-corruption legislation and initiatives in recent years, successful progress will depend upon a whole-of-society, rather than a top-down approach. “Bribery in public service delivery is still widespread, and success in fighting it has been limited. Governments alone will not be able to deliver the Agenda 2030 goals. Civil society can and should play an active role to close this gap,” said PTF Adviser Dr. Hady Fink at a recent international forum. He claimed that civil society organizations (CSOs) can play a significant role in the fight against corruption and should be involved in efforts to increase transparency and integrity, particularly in public service delivery. 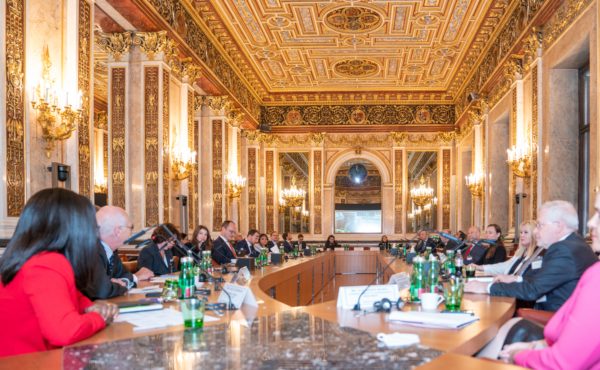 In a session on the role of non-government actors, Dr. Fink presented the paper he co-authored with PTF Chief Technical Advisor Vinay Bhargava titled: CSO Engagement to Deliver the Agenda 2030 Anti-Corruption Targets: The Case for a Supranational Initiative. The report constituted PTF’s response to a call for papers by the American Society of International Law, the World Bank, and the Organization for Economic Cooperation and Development (OECD).

The report makes a strong case for rethinking the current anti-corruption approaches in which funding for anti-corruption and good governance programs is overwhelmingly allocated to government efforts (supply side) with relatively little given to non state actors (demand side). Increasingly, evidence has grown that civil society can make a meaningful difference in the furtherance of anti-corruption aims. By virtue of their ability to act independently of governments and reach local communities directly, they have helped reduce bribery in delivery of public services as called for in Agenda 2030 and Sustainable Development Goals. With this context in mind, CSOs can play an active role in the fight against corruption by supplementing, not replacing, government efforts. In particular, they can serve the following functions:
1. Influence the design of government and international financial institution (IFI)-funded programs by leveraging opportunities for consultations, advocacy, and participation in steering or advisory committees
2. Engage in government programs to enhance results and development outcomes, including reduced corruption, citizen inclusion, participatory decision-making, and increased transparency and accountability
3. Monitor commitments made by governments and IFIs, track progress, and hold them accountable for delivery by participating in multi-stakeholder review processes
4. Reach communities by virtue of their local connections and grassroots efforts

Through the mechanism of a supranational initiative, CSOs could support corruption-free service delivery in a meaningful way, Dr. Fink said. He described how effective support would involve long-term programmatic—rather than project-based—funding, CSO independence to pursue initiatives relevant to their local context, and meaningful involvement in national efforts. However, thus far CSOs have repeatedly faced a two-fold challenge to their involvement in anti-corruption efforts: a lack of resources, and a lack of civic space. Dr. Fink reiterated the widespread acceptance of CSOs’ value-add and improvement of development outcomes, yet the political will needed to fully integrate their work into Agenda 2030 initiatives has not materialized.

In conclusion, said Dr. Fink, despite the strength of the argument for why CSO engagement in anti-corruption efforts should be supported at the supranational level, the more compelling question may be: why not?

Dr. Vinay Bhargava, PTF’s Chief Technical Advisor, has over 25 years of experience in economic development and donor assistance covering Asia, Africa, the Middle East, and Eastern Europe. Based on his experience, Dr. Bhargava played a significant role in the preparation and writing of the PTF report discussed in this article: CSO Engagement to Deliver the Agenda 2030 Anti-Corruption Targets: The Case for a Supranational Initiative.

Dr. Hady Fink is a PTF Europe adviser with more than ten years of experience in the field of anti-corruption, governance, and compliance. In addition to his volunteer work, he has been dealing with corruption throughout his academic and professional career in different positions both in the private and public sector. With Dr. Bhargava, Dr. Fink co-authored the report described in this article.

Your ticket for the: A Supranational Response to Corruption: The Case for CSO Engagement

A Supranational Response to Corruption: The Case for CSO Engagement