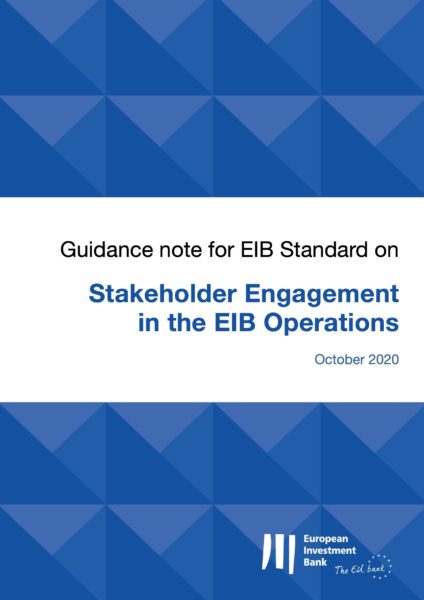 The Guidance Note was prepared with the support of John Clark and Marie-Carin von Gumppenberg from PTF Europe, an affiliate of the US-headquartered Partnership for Transparency Fund.

The EIB’s handbook provides clear and compelling information on how best to ensure that development projects embrace all the key stakeholders, including the most vulnerable people, to secure meaningful benefits for their lives. It aims to enable civil society, project consultants, and others engaged in development to address the EIB’s primary concerns and policies in the planning and the implementation of projects.

One of those policies concerns corruption, as the EIB notes in part: “…the EIB will not tolerate Prohibited Conduct (i.e., corruption, fraud, collusion, coercion, obstruction, money laundering, and terrorist financing) in its activities or operations.”

The EIB provides guidance to governments and businesses responsible for EIB-financed projects on how to meet EIB operational requirements. It also summarizes good practices for meaningful stakeholder engagement to help all parties maximize potential project gains.

The target audiences for this EIB Guidance are: “project-affected persons, communities, civil society organisations, government agencies and local government units of relevance, and other parties interested in EIB-supported projects. These stakeholders can use it to see what is suggested regarding stakeholder engagement in EIB-financed projects, and to identify possible entry points for their own involvement.

The EIB has also launched a parallel “Guidance Note” for its staff on the same range of issues (also with the support of PTF) and a training program for its staff on stakeholder engagement based on these reports and a series of project case studies, also compiled by PTF.

Your ticket for the: European Investment Bank Releases Development Handbook, with PTF Assistance